If you have read earlier posts you will know they are not that long and when it comes to kit its more about “can I achieve what I need to achieve” rather than pixel-peeping sharpness reports. This will be the same… 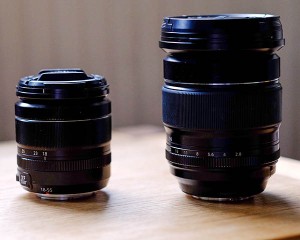 The “standard” zoom focal length is the staple of most press photographers work, particularly in the entertainment sphere (with media walls, parties, tight sets and spaces). Since having the Fujis I have been using the 18-55 / F2.2-4 . Its good, in fact as a kit lens its great but to be honest, I HATE variable aperture lenses – most of the time my flashes are on manual and so altering the exposure as I zoom is a real pain, outside this is less of an issue (but I still hate them on principle 😉 ).

I have had the 16-55/2.8 for 2 weeks and run 2 jobs through it, delivering 800 images to clients and press during that time (that does not include the deleted ones or the ones I don’t like), thats delivered images from this lens (its almost 2000 images counting all lenses). So although I have only had the lens for 2 weeks, I think I have a pretty good feel for it.

You can see from the images it is far bigger than the 18-55, its (obviously) heavier and feels really solid in the hand. Much like the 50-140/2.8, you feel this is a lens that will last a while, will take a few knocks and keep going (unlike some of the “plasticy” feeling lenses that a number of manufacturers are producing now to reduce costs).

Mounted on the front of the X-T1, the balance is a little front heavy but add the battery grip and everything feels right again, there is a certain weight in your hands and the the zoom ring feels lovely and fluid, not too lose, not too tight. With this setup, you loose a little of the weight advantage over DSLRs but its still lighter than my old Nikon/24-70 combination.

If you have used other Fuji lenses the performance is as you would expect (to my eyes) tack sharp with the colours & contrast being spot on. 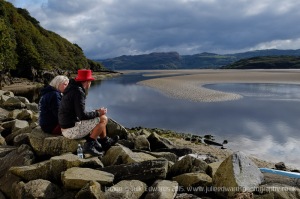 I spend a lot of time pointing cameras at light sources (you can’t beat a bit of back lighting) and I am pleased to say, it handles this really well. It does not flare nicely like the 56/1.2 it just produces little “rainbow” flares – this is the worst one I got.

Atmosphere at Festival No.6 on 04/09/2015 at Portmeirion, Gwynedd, North Wales. A musician waits in a food queue at night. 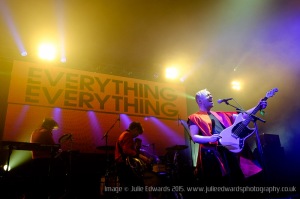 So to sum up, I really like this lens, it feels right, it feels like it will last a long time producing the results I need. Basically its a real workhorse.

As mentioned in my last post, I spent the weekend at WOMAD where it tipped down for one day, was sunny the next and finished with more rain on the third. I was covering it with my Fuji kit plus a borrowed 50-140/2.8 and in these conditions they got a thorough workout!

First up, apologies for mixing monochrome and colour images in the same post – it’s something I hate but they do all demonstrate points.

The thing about festivals is they really do feature a very wide range of photography; from covering artists on stage, to posed portraits out and about along with unposed “atmosphere” portraits and general views. Add to this mix the weather and the weekend was a real test: for both the kit and myself!

Unpacking kit on my desk. The most important item for Friday was the chamois cloth!

One of the great things about switching to the Fuji system is I can totally fit my “out and about” kit on my Think tank belt. I use 2 “Skin Body Bags” filled with an 2 X-T1’s with the 56mm on one and the 55-200 on the other. Additionally I carry the 35mm in the pouch and the 14mm attached to a x-1Pro. For the weekend I replaced the 55-200 with the 50-140. Unzipping the pouches to their full length enables the camera and lens to sit inside perfectly with the hood fitted, ready to shoot but with the flap closed and fully sheltered from the heavy rain.

I’m pleased to say, the cameras did not miss a beat. Seriously, not a hitch. I was obviously careful, as I would be with any kit, making sure they were covered as much as possible, leathered down as much as possible when under cover but when out in the rain, they got wet, they got very wet but carried on working, focusing and enabling me to get shots such as this. I can’t say I like working in the rain but it can produce wonderfully atmospheric images.

Saturday was the opposite, lovely sun and clouds. The morning consisted of the usual walking around, capturing the atmosphere before heading to the stages in the early afternoon.

Ester Rada was very photogenic but did not venture too far from the mic stand. Having the job in the bag in the 1st song (on the long) I thought I would break out the 56 and see if F1.2 would isolate her from the mic stand. With my cameras permanently set to MS+ES mode, opening the lens wide just means they switch to the electronic shutter and use what can only be described as daft shutter speeds. The fact is that the distance produced too great a depth of field even at F1.2 but the mic is (just) out of focus and she is sharp! A side effect is that the ES  produced an effect on the electronic backdrop, one that I quite like and which adds to the picture I think.

As the evening arrived the light was fantastic and just screamed “atmosphere” so a colleague and I headed out to chase the light.

I wanted to isolate this boy climbing in the trees. It was tricky and the AF system could just not get a lock on his face. I switched to manual and as I twisted the focus the EVF automatically zoomed in (I did not know I had that set up – I just thought it would focus-peek) that with the peeking enabled me to isolate him very quickly.

Picking other images from this walk-around is just so difficult. The light was glorious and we both had a whale of a time picking the locations and shots, shooting into and across the sun… A couple of my favs (one mono, one colour).

Chair-O-Planes. So much in this image, the detail, the expressions, the light! X-T, 56mm.

Sunday and it was back to the rain!

I’ve not really mentioned the 50-140. Basically it was faultless. The first thing I did was remove the tripod mount and I have to say it was still a bit front heavy on an X-T1, something I think will be countered by adding the battery grip to the body. The zoom ring is really smooth and overall it just worked (which is all you can wish for), the AF was fast and as you can see above, the image quality is great with lovely rendering of out of focus areas.

With the monks I wanted to capture their stillness whist adding the movement of the drums. Shooting from the side I engaged the OS and dropped the shutter to 1/30th. The monks are perfectly sharp whilst the drums are blurred. Exactly what I wanted and I’m very impressed with the OS.

Overall, I was vey happy with the performance of the cameras and especially the 50-140. As always happens, I did get one or two comments from other photographers about the fact that I have switched to using only these cameras but when they saw the results… well, the results speak for themselves.