No time to…….
Not as quite a glamorous job as some recent ones… I am in #brighton for #lab21 this week.
After a lovely evening , time at the theatre @Worthing Theatres and Museum #ifwallscouldtalk @Lucy_Worsley and a late night discussing history with friends (all things history- houses, living and films) , I needed a quiet start to the day (not the usual gym) #worthing #sunrise #beach
A complete contrast to my last post.
The last post mentioned I was after #livemusic #crowdshots & this was the reason for taking the 17mm on #gfx50r...
Royal Blood ; Guitarist and Singer Mike Kerr with Drummer Ben Thatcher play a Homecoming Gig on 15 September 2021 at Brighton Centre, Brighton.

It’s been a while since my last iPad (Pro) workflow post and I thought it was time to share how it’s changed and how I have moved on.

This time last year I posted how I was using the iPad for all of my editing, captioning and sending from out on location, I detailed how well it was working at Cannes 2017. Then something changed. Specifically IOS11 came along.

IOS 11 was touted as the great update that will make the iPad a real contender for replacing the laptop (which I had already done), it would make running multiple programs easier, moving information from one app to another would be easy. Yep – this was the “update we were waiting for”. So in September/ October last year I installed it… and the crashes started… I assumed it was Lightroom not updated for 11 so I waited for an update.. then I assumed that maybe IOS11 did not like my SD reader so I got the new and latest. Still it crashed, still it would not read JPG images off of the SD card.

Finally I gave in and went back to an Apple Store “Genius”, showed them the crashing. They got out a brand new empty iPAD Pro with IOS11. Again crashed reading the JPG’s. Dug around and found an iPAD in stock with IOS10 installed. Bingo, 900 JPG images imported no problem. Back to IOS11 – crash! SO they replaced my iPAD with the “new” one running IOS10.

This replacement worked for a couple of days, until it decided not to allow me to connect to the mobile network unless I updated to IOS11 – It seems once your account has updated to the latest OS there is no way back.

So here I was, left with a £900.00, powerful, fantastic device that would not pull more than 156 Fuji JPG images from an SD card.

The problem was reported to Apple back in November 2017. If you want my support case number, it’s 100365002050 its been open since then. My support engineer (yes I have an assigned engineer at apple), whom I contact after every update to let him know that I have tested it again and its still not fixed. No still not fixed after Apple have logged in and connected to my iPad 3 times. They have had the files that I am trying to import, the crash dump files from my iPAD, a video showing the crash. They have acknowledged the problem, my engineer is very pleasant but the bottom line is 6 months later and my iPAD will still only import 156 JPG images from an SD card (RAW / RAF files are fine).

My iPad is not totally useless though, I did write this on it. Actually its not that bad – I still use it when traveling for non-urgent work where I would work in RAW and I also use it for smaller news jobs where I will be importing less than 150 images or where I will be using WiFi to transfer the images.

ShutterSnitch is still my main stay here. With this simple switch to enable the Fuji WiFi on the app, I can either connect as normal and transfer selected images or I can wirelessly tether to the iPad and transfer every jpg as it’s taken.

The images import into a collection where I can edit them using the recent in-app-purchase of image adjustment to do basic crops and corrections. 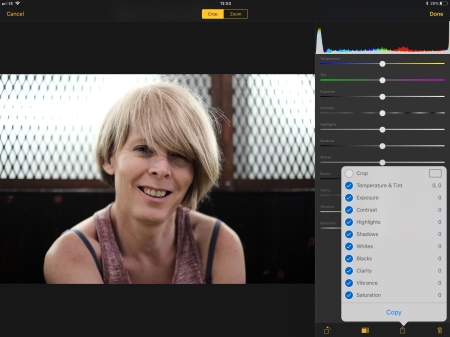 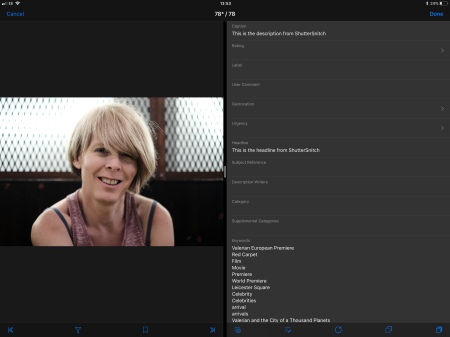 Before exporting via FTP or Dropbox to wherever I need them.

ShutterSnitch has come a long way over the past few months meaning for live news work, it is now a one-stop-shop. (So I no longer have to work with the unsupported PicturePro) .

I am more than happy to do a detailed review and technical post on ShutterSnitch if anyone is interested – let me know if you do!

As I am just finishing this post, Adobe Lightroom Mobile has just been updated, my initial look indicates its almost there in terms of capabilities now – cloning and custom presets are supported! I’ll look at this in a future post also. Let me know what you would like to know about first!

I look forward to your comments.